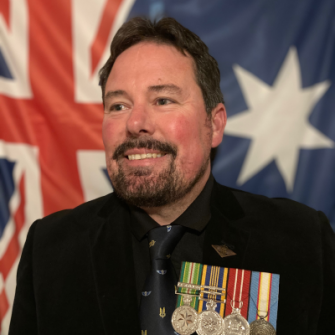 King Island Mayor Marcus Blackie grew up on the Sunshine Coast in QLD, during the Bjelke-Petersen area and completed high school at St John’s College, Nambour in 1989. After attending University in Melbourne during the early 90’s he then embarked upon a long military career.

Mayor Blackie was accepted to and graduated from the Royal Military College Duntroon, Canberra as an Army Officer in 1994. After Duntroon he attended pilots school in Tamworth but then moved on to specialize in military air drop, parachute operations and logistics.

In the mid 2000’s he was selected for a specialist team to develop & deliver a bold new air drop boat capability for Australia’s special-forces. That capability was successfully fielded ahead of schedule and under budget in time for deployment at APEC 2007. Because of the success of that project and the reputation he had by then established he was later appointed a department head at the legendary Australian Special Air Service Regiment at Swanbourne in Perth, in charge of capability development.

Mayor Blackie is a veteran of operational service in East Timor and has proudly represented Australia in over a dozen countries. He was awarded two commendations in his Army career for exceptional achievement.

Mayor Blackie is also a graduate of the ADF School of Languages as a French linguist, skills which earned him two overseas French representation assignments.

In October 2011, another Army career highlight came along when he was appointed 2nd Equerry to the Royal family during CHOGM in Perth.

In 2019 Mayor Blackie decided to move on from the Army and develop his property on King Island Tasmania. Army resettlement sponsored him attending the New Zealand Cheese School, becoming a trade qualified cheesemaker and judge. So on initial separation from the Army he went to work for King Island Dairy in the blue cheese factory for 18 months. During 2021 he returned to an old Army role in Darwin working fly-in-fly-out from King Island, but as of Jan 2022 is now finally retired from the Army and free to make a full local contribution.

Mayor Blackie is married to Narelle and has two teenage daughters, Leada and Aruba.