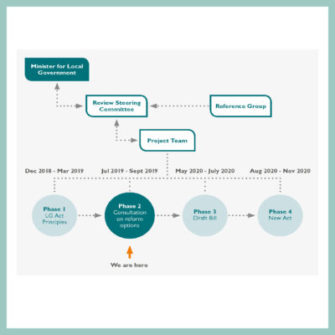 It is 25 years since the introduction of the Local Government Act 1993. The past quarter of a century has seen significant social, economic and technological changes. The role of councils and community expectations have expanded in line with these changes.

The Act has been amended and updated a number of times in recent years in response to emerging issues. However the making of continuous, ‘catch-up’ amendments is not desirable, efficient or sustainable.

On 26 June 2018 the then-Minister for Local Government, Hon Peter Gutwein MP announced that the Government would undertake a major review of Tasmania’s local government legislation (the Review) during Budget Estimates Committee Hearings.

The Review will involve three consultation phases, with the intention to introduce a draft Bill to Parliament in mid-2020.

There will be a number of opportunities for the community, the local government sector and other stakeholders to be involved in consultation through forums and the release of consultation papers at various stages. Consultation at the highest levels of Government will also occur, with the Review being a standing item on the Premier’s Local Government Council agenda.

The proposed Reform Directions have been informed by research, practices in other Australian jurisdictions, feedback and submissions from Phase 1, as well as discussions and advice from the Review Reference Group.

A multiple-choice survey has been developed to rate the level of support for each Reform Direction. The survey can be taken online at the link below, or downloaded and submitted via email or post.