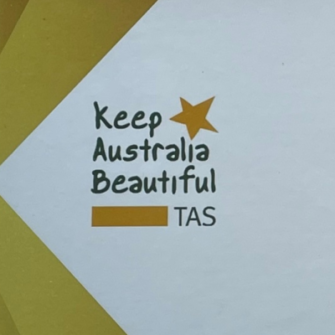 It was an honour to represent King Island at the Keep Australia Beautiful and Tidy Towns Tasmania – Sustainable Communities awards ceremony last week.

What started as an anti-litter campaign in 1968, Keep Australia Beautiful is now so much more; encompassing research, recycling, environmental guardianship and sustainability.

At the beautiful Dial Park sports complex in Penguin, I joined hundreds of other Tasmanian representatives from all walks of life, where we learned about school projects, such as a home schooling group who make recycled rubbish bags designed to use in cars. Kingston High School received an award for their inspiring greenhouse project.

We applauded projects in Launceston and Wynyard, volunteer projects and individual projects.

The key speaker was David Maynard, senior curator of natural sciences at QVMAG, who told us about regeneration in native reserves using fallen timbers and fire. I have invited David to King Island next year, to advise council and hopefully present his inspiring work to residents.

Joined by Audrey Hamer and Heidi Weitjens, I was not expecting the whole raft of awards King Island received;

Minister Roger Jeansch presented the prestigious silver cup, where King Island’s name is engraved on the base, joining past winners.

I was quite overwhelmed by all the awards, it is really wonderful to be appreciated for all the work we do to enrich our island community.

On behalf of King Island, I thanked Keep Australia Beautiful for their recognition, which we are honoured and humbled to have received.

King Island will now represent Tasmania in the National Sustainable Communities Awards and I believe judges will be on the island in late January 2022.

I strongly believe that whilst King Island is economically sustainable, without the invaluable work by volunteers and volunteer organisations,  we would not as a community, be sustainable.

To make up for not being at the awards presentation, I would like to invite the community to join me in re-presenting and celebrating the awards to the above organisations.