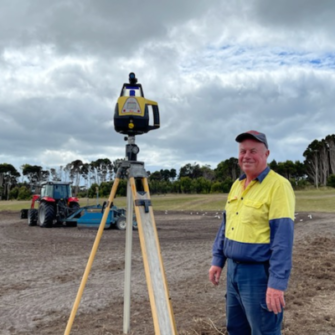 Work is well underway to improve drainage and the playing surface of the Grassy oval, as part of a major $300,000 upgrade.

Trevor Mayfield, an experienced oval builder, has stripped the grass thatch layer, rotary hoed the surface and is currently laser levelling the surface to remove bumps and hollows.

After the Grassy Football Club raised concerns with the state of the ground with Council, the Commonwealth Government agreed to fund the project.

The next phase of the project is to spread and laser level approximately 3000 tonnes of sand and sandy topsoil before seeding and fertilising the grass. A new drain will also be installed around the southern side of the ground.

Council’s Parks and Recreation Councillor Group is overseeing the project and has consulted with the Club, the Grassy Progress Association and Mr John Geary, a turf specialist.

Other works include refurbishing one of the existing changerooms and replacing the other with two converted shipping containers, a 40’ shower and toilet ‘block’ and 40’ changeroom.

The converted shipping containers could also provide another benefit as they can be transported and used at other locations, if required.

The Parks and Recreation Group found the cost of buying a 20’ container converted to a kiosk was $20,000 and over the grant budget and decided on hiring the Lions Club mobile kiosk van when football games or other events are at the oval.

King Island Mayor Julie Arnold, said “This is a great outcome for junior and senior football in Grassy.