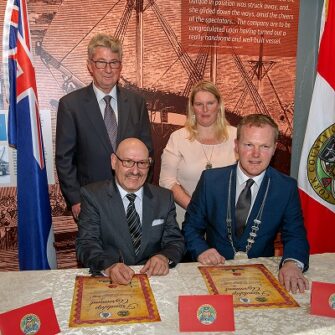 Deputy Mayor of King Island and President of the KI Historical Society Luke Agati was one of a delegation from Tasmania to visit Passage West Maritime Museum in Cork this month to sign a friendship agreement between the two maritime museums.

Signing the Friendship Agreement on behalf of the Cork County Council, Chairman of the Municipal District, Seamus McGrath said “this friendship agreement is a wonderful way to acknowledge the heritage and history that inextricably links our two places despite the thousands of miles between us.”

“Of the hundreds of ships that left Ireland for the New World of Australia, one in particular has brought our two inimitable communities together from which we forge a solid bond of mutual friendship, despite our distances.” said Deputy Mayor Agati.

Reading a letter to the people of Cork on behalf of King Island Mayor Julie Arnold, Deputy Mayor Agati said:

only seven women survived to reach Disappointment Bay some 2km from the wreck.

Disappointment Bay, one of King Island’s most beautiful beaches, is the resting place of 100 of Neva’s passengers.

Although they lie in sand dunes in the north of our island, there is a deep sense of respect among King Islanders who remember and protect the history.

We are grateful and incredibly touched that our two municipalities, on opposite sides of the world have come together, united in remembering those who came from your shores to ours and now lie in peace”

A sculpture by Tasmanian artist Catherine Stringer was among the items presented to the Passage West Maritime Museum on behalf of King Island. Made with marine macro-algae, harvested near ther site of the the Neva wreck and inspired by Catherine’s time on island as part of Council’s artist in residency program.

Another of the ships to wreck off the coast of King Island remains Australia’s worst civil maritime disaster, with the 175 Anniversary of the ‘Cataraqui’ being commemorated across five days in August 2020. To keep abrest of plans, you can follow their dedicated Facebook page.