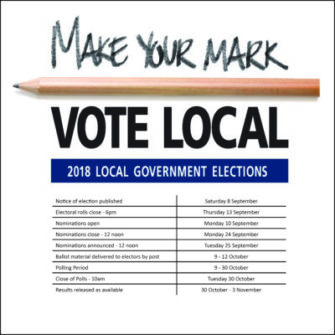 As a Community we elect Council

October’s Local Government election is your chance to influence how our Community’s Council operates over the next four years, either by voting for your preferred candidate, or by standing for one of these positions yourself.

Council is empowered by law to make decisions on many matters of importance. These decisions are made in the public arena at the Ordinary Council Meetings, allowing members of the community to access the decision-making process.

A decision supported by the majority of Councillors at a meeting of Council (at which a quorum is present) is a decision of Council. Neither the Mayor nor the Councillors have the authority to individually act or make decisions on behalf of Council.

The Mayor is the principal Council spokesperson, articulating Council policies and positions as decided by the majority.

The Community rightly expects the highest standards of conduct by those they elect to hold office. Failure to comply with these standards erodes the trust the community confers on their elected representatives and for this reason, Councillors are obliged to comply with prescribed ethical and behavioural standards in the performance of their role. They must make a written declaration that they will abide by a Code of Conduct before taking (and remaining in) office.

The General Manager (GM) provides the link between the Council’s elected members and its employees. All Council staff are responsible to the GM and have a duty to carry out Council decisions. In addition, they assist the GM to provide information, guidance and support to the Councillors who make decisions on behalf of us all.

If you are thinking about nominating as a Councillor in the upcoming election, a good way to find out about the role of Councillor is to attend Council meetings which will help with preparation for your future role. You will get a feel for the issues, the values and the level of debate.

Alternatively, there is a wealth of information available online. Visit the Local Government Association of Tasmania and Electoral Commission sites to find out more.